It's been several days since my last post. So much has happened including so many people. I will mention a few for your entertainment. Let me start with some class mates and one that I went all the way through school with, Barbara Ann Young. She and I were in Ms. Constantini's First Grade class at Aliso School shown here (note: "Are we good helpers?" and "Our color friends").

Barbara has been my life long friend so when she came by the mural one afternoon and suggested we go have a drink inside Senor Frog's, what could I say? Love you, Barbarian.

On another afternoon our Senior Class President Tom Riemers showed up the day after his 60th birthday.

And later that day another Carp Warrior from our Class of 1970, Mona Duarte dropped by.
And on another day my classmate, neighbor and fellow artist Matt Moore stopped and gave me a little help shaping the surfboard.
Meanwhile, back at the ranch.... we welcomed our first calf. An adorable, wobbly, silky black sweetheart reminding us that Spring has arrived. 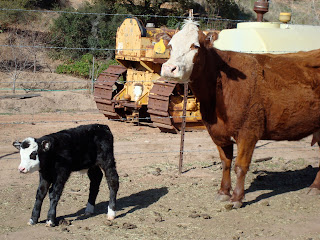 And back down to Wullbrandt Way again.... I had the faces on the harbor seals painted so JC was able to paint on the whiskers. The rough texture of the plaster wall makes it very difficult to paint thin lines so he used a small brush and took his time before finishing the rocks at the rookery. Meanwhile I was overhead completing the top portion of sky that will have the Pelicans soaring across. This mix of Ultramarine Blue, Titanium White and Yellow Ochre is a more subdued and natural color than the "Kodachrome" Cerulean Blue of the "postcard" sky. Blending the blue from light to dark and back to light is challenging. I want for there to be some "life" to the sky as seen in  the maquette but the transition must appear to flow somewhat evenly. This expanse will be broken up when I add the Pelicans which will help conceal these transitions. 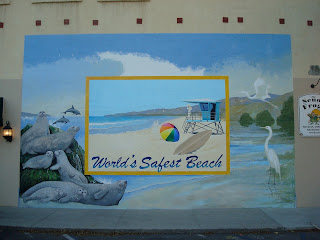 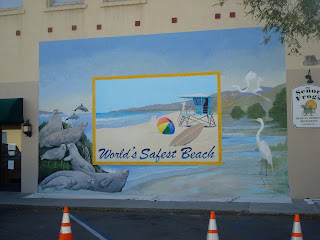 It was not just the Class of '70 that visited WSB this week, there were plenty of Carpinteria Beautiful people as well.
"Are we good helpers?"
"Our color friends" 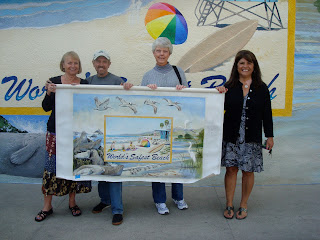 The Mayor:
Fellow Artists:
Neighbors that I lean on:
And new friends: 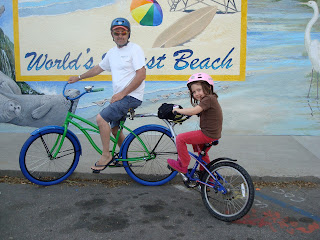 Friday night I stayed in town so I could attend the ribbon cutting ceremony at Bartlett & Harrington, Jeff Moorhouse and Avocado Festival's new digs in the Bright/Powell building. Next morning my Mom treated me to breakfast at Cajun Kitchen before drawing the shore birds, then painting them the way Dorthy Tripp taught so many of us to do.... " with a flick of the brush".... and so on. 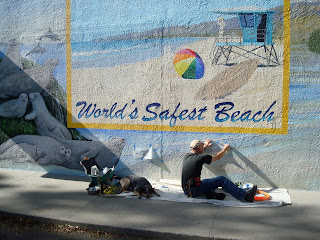 JC came to pick me up and we headed up to the top of Rincon Mountain for Graham's birthday BBQ.
Then back up the Chismahoo to Rancho Botello to feed the animals before dark.

"Daylight Savings" having kicked in this morning,  it's an hour later than I thought and I need the sleep if I'm going to get some painting done tomorrow. Word is that rain is possibly on the way later this week.

Don't forget to scroll down to "older posts" and go to "Feburary" where I continue to add to the sequence of updated progress shots. It's starting to come together!
Oh, and which ever one of you sent me that "halo" in the CVN this week........ I was touched.
Thank you.
Posted by Wullbrandt at 12:15 AM