Winging it on Wullbrandt Way 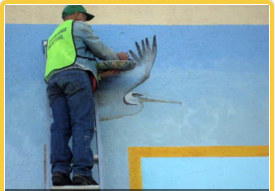 My plan has been to bring the scaffold in to paint only the top 1/4 of the mural in order to minimize impact on pedestrian traffic on Wullbrandt Way. The scaffold would have consumed so much of the sidewalk I was reluctant to use it when making the initial measurements, cleaning and priming and painting the sky. Today I decided to try painting one of the 4 Pelicans. If it felt unsafe at all, I would make plans to bring the scaffold down from the ranch. 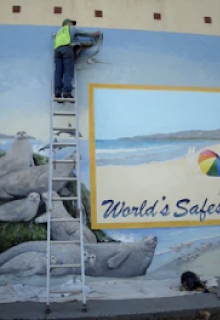 In the studio I had prepared a full scale drawing of a Pelican. This was done by placing the original 2" scale drawing into an opaque projector and enlarging the 2 inch scale to 1 foot scale and penciling it onto butcher paper. After positioning the drawing on the wall with duct tape, I slipped a sheet of graphite paper under the drawing and traced the pelican onto the wall. Following the faint graphite outline with a little  Greyed Raw Sienna gave me the basic shape. Blending Neutral Grey, Blue and White I blocked in the body and wings. Neutral Grey, Burnt Umber and Carbon Black with some matte  medium quickly gave life to the feathers. I had padded the top of the ladder so that it would not mar the painted surface and only had to reposition the ladder once before the Pelican was close to completion. 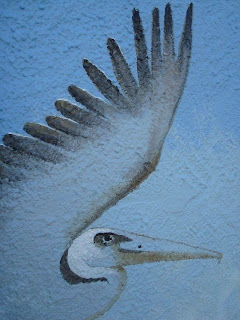 The photos of me today were snapped by my old friend Paula Galbraith. I came down the ladder, trader her my palette for the camera and caught her and fellow painter Chris Galbraith stretched out with Zorro. They had just come up from the beach for a look at the mural on their day off. They own Carpinteria Frame and Art. 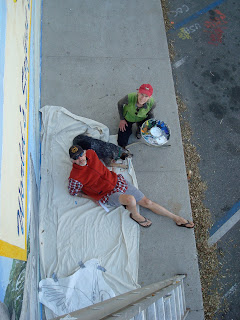 Plenty of other visitors made for a fun filled day. Some (Patty Manuras) went running down Wullbrandt Way when I pulled the camera out.


Hoping to get a couple more Pelicans up before the rain arrives. Now that is wishful thinking.